The musical Fiddler on the Roof, which details the life of a Jewish family living in the Pale Settlement of Imperial Russia, is one of the most recognizable names in Broadway show history. First performed in 1964, the show attained international success and was the first musical to be performed over three thousand times. The musical dominated the 1965 Tony Awards and the 1971 film was nominated for an impressive 8 Oscars, winning three including best score.

The show succeeded for many reasons; the characters were relatable (and loveable), the topic matter was interesting, and the show’s plot was dynamic. But perhaps the most intriguing part of the show was its combination of music and lyrics. The show’s lyricist Jerry Bock and composer Sheldon Harnick collaborated to create amazing and memorable songs. The unique combination of Bock’s dynamic music and Harnick’s complex lyrics enabled the songs’ melodies and rhythms to incorporate the character’s cultural backgrounds while simultaneously giving further insight into the character’s communities and lives. This musical synergism served to further develop the narrative of the show.

The show begins with a famous number called Tradition sung by the show’s main character, Tevye. It outlines what life is like in the small Jewish village of Anatevka and sets up a central theme of the show: staying true to tradition without question. The song’s melody changes throughout based on which group of characters is singing. Each major group, the papas, mamas, sons, and daughters are all given a chance to sing about their lives and the background music changes accordingly. However, the song always rebounds back to the same central tune providing unification and balance. The song’s central melody is unmistakably Jewish; as explained by Phillip Lambert in his examination of Bock’s melodic choice: “The chord progression found in Bocks’ creation, rocking back and forth between G minor and C major harmonies. Such resemblances help amass a rich essence of Russian-Jewish musical sensibility” (Lambert 168). The song’s off-key tune has flavors of Yiddish melodies and reflects the culture of the villagers of the time in which the story is set.

When creating the show’s music Bock cited two major sources of inspiration. His first source of inspiration came from recordings of early 1900’s Jewish Folk music. When describing these sources of inspiration Bock explains, “melodies were borrowed from traditional Jewish music […] and set in contemporary fashion”. This modern spin on classic Jewish tunes is discussed in The Americanization of Tevye; “the Western/American elements comingle to create a ‘Jewish-American’ sound” (Wolitz 531). His second source of inspiration was Yiddish songs sung to him as a child by his grandmother. Knowing these two sources of inspiration is important for understanding how authentic and culturally accurate the melody of Tradition and the rest of Fiddler’s songs were. Bock’s decision to have the music accurately reflect the culture of the villagers at that time allows the show’s songs to more effectively set up the play’s setting and empathize with the villagers, thus furthering the narrative of the show.

Not only does the music itself incorporate the village’s culture, but the song’s lyrics also play an active role in explaining what life in the village is like. The song is central to setting up the play’s plot, each group explains what their role in the village is but more importantly, how tradition keeps them all “balanced”. This is crucial to the plot’s development for two main reasons. First, each group can very clearly outline what their role in the village is. This enables the audience to quickly understand the relationship between all parties involved in village life. Secondly, the song sets up the show’s major theme, the struggle between old and new and their changing relationship with tradition. The song’s importance was explained by Harnick on an NPR Fresh Air segment:

“what you have to write is a number about traditions, because we’re going to see those traditions change. And that’s so important in the show. Every scene or every other scene will be about whether a tradition changes or whether a tradition remains the same. So instead of a song with the mother and the daughters getting ready for the Sabbath, he wanted us to write a song about tradition because he thought that’s what the show was really about” (Fiddler lyricist tells his story NPR Fresh Air April 30th 2014)

Harnick’s remarks on NPR give great insight into how Harnick and Bock viewed their songs within the context of the show itself and further emphasizes how their songs were used to develop the show’s story. 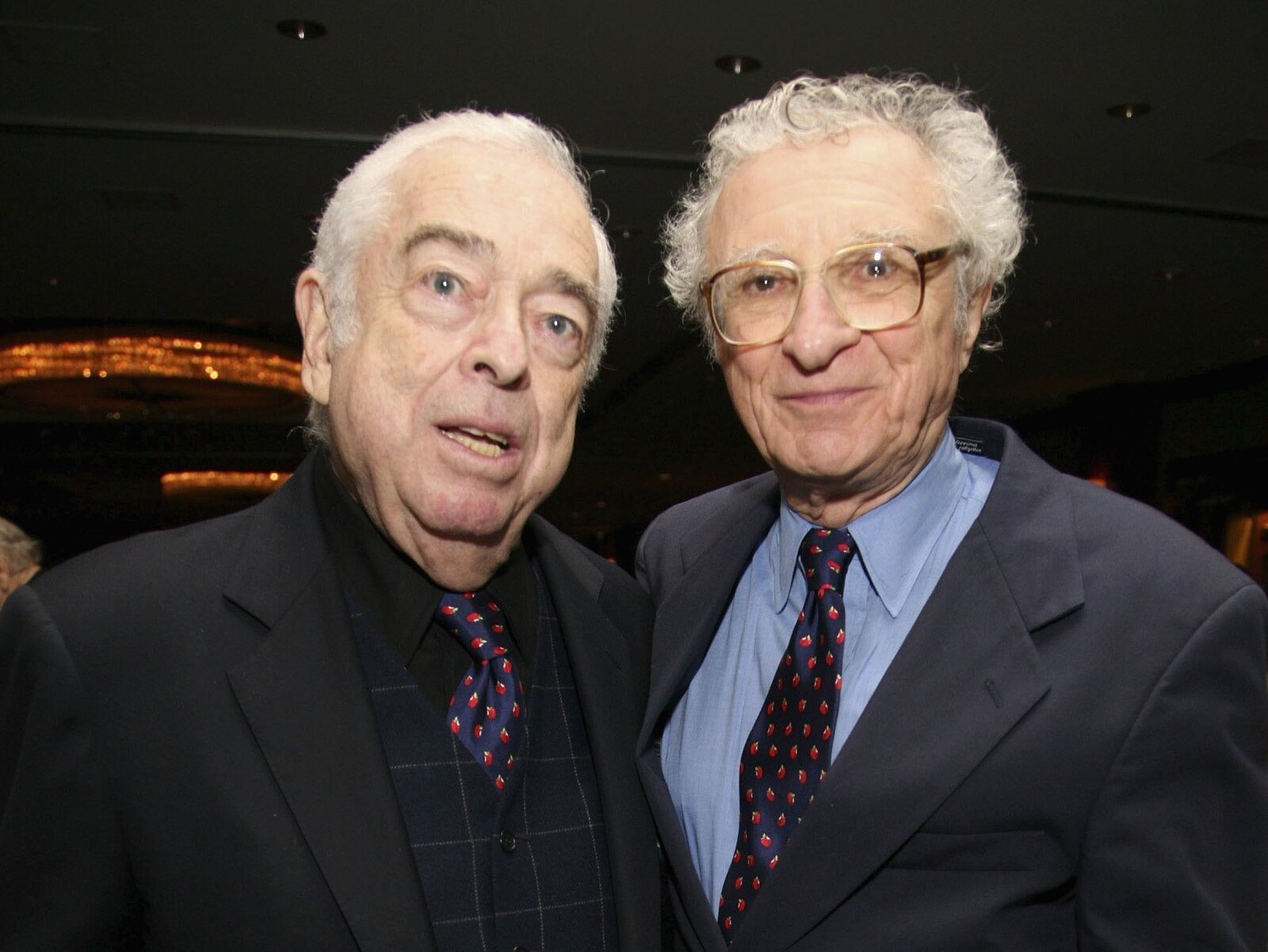 (Sheldon Harnick (right) with the late Jerry Bock (left) are shown above. Click here for a link to Harnick’s NPR interview)

In the late 1950s and early 1960s when the show was written it was common for songs within musicals to be somewhat superficial. Songs within musicals did not necessarily play a central role in a show’s plot development. Songs more regularly served as frills added to the play to entertain the audience. However, Bock and Harnick had a very different attitude towards the songs they created. They believed that every song they wrote and composed should play a role in driving the narrative of the show. As explained by Alisa Solomon, “They [Harnick and Bock] concurred on a core principle: that songs served the show and shouldn’t be written as stand-alone commodities” (Solomon 97). By understanding Bock and Harnick’s attitude towards their music, one can better understand how important the song’s lyrics and melodies were to driving the development of the show’s plot.

The use of songs to further develop the show’s plot is further emphasized by the song Matchmaker. The song is sung by Tevye’s daughters together when they’re doing chores outside their house. The song explains the role of the matchmaker in the village and the general process of matching a man and wife. The lyrics further explain that this process is generally seen as a happy affair but it is not always the case. Although it’s done in a humorous way, the song illuminates that tradition demands one must accept the matchmaker’s recommendation, no matter one’s own personal feelings. As sung by Tzeitel, “Have I made a match for you, he’s handsome, he’s young! All right, he’s sixty-two” (Stein 18). Tzeitel goes on to explain that none of the daughters should await their matches with too much anticipation as they are from a poor family and that “Whatever Yentel [matchmaker] brings, you’ll take” (Stein 18). Eric Goldstein explains the somewhat veiled and transactional nature of the matchmaking process: “most matchmakers (shadklonim) […] concluded deals and marketed prospective brides and grooms in the same way others negotiated business transactions” (Goldstein 62). Without this song, the entire matchmaking process might only be seen as a positive experience. Without this song, the audience would not understand the angst with which Tevye’s daughters entered into this process. Thus, Matchmakers’ lyrics, just like those of Tradition, play a crucial role in further developing the narrative of the show.

The songs within Fiddler on the Roof play a central role in the development of the story and advancement of the show’s narrative. Lyricist Sheldon Harnick and composer Jerry Bock utilized their unique skills to create songs in Fiddler on the Roof whose melodies accurately reflected the culture of the show’s subjects and lyrics built upon the show’s dialogue to further expand the show’s plot. This extraordinary combination created just one more aspect of Fiddler that propelled the show to international success and a place in Broadway history.

Lambert, Philip. To Broadway, to Life!: the Musical Theater of Bock and Harnick. Oxford University Press, 2012.

Solomon, Alisa. Wonder of Wonders: a Cultural History of Fiddler on the Roof. Picador, 2014.