Many everyday tasks involve decisions about how to act on objects in our environment. While most of these actions unfold in a seamless fashion, a complex orchestration of mental processes including attention, decision making, and action control occur to guide our behavior.

Take for example, the shopper in the produce section with grocery list in hand. Guided by the item cucumber read from the list, the shopper may form the intention to pick up a cucumber, tune the attentional system to look for green cylindrical objects, and prepare the appropriate hand position to pick up the vegetable. However, we are all too aware that when shopping our actions are not always guided by our intentions. A display of particularly red tomatoes may draw you attention and trigger the idea of the perfect BLT, leading to the purchase of an item not on the list.

In both of these scenarios, visual attention plays a role in the performance of the task. In the former case, the shopper visually searches for the particular characteristics of the object she intends to select. In the latter case, her attention is captured by a particularly salient object and results in the selection of that object. Individuals may choose to look for an object or may look to choose an object to perform an action upon. 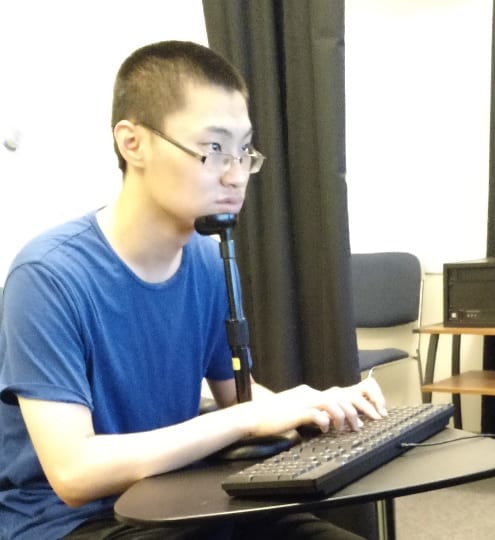 over the last year in the Cognitive Control Lab funded by a Faculty Research Grant, we have been investigating these roles that attention plays in choice environments using eye tracking to monitor the focus of attention in a simple choice task. Participants in these experiments view a computer display containing a letter and a digit. They may select to perform a consonant/vowel judgment or an even/odd judgement each time the display appears, which happens several hundred times over the course of an hour long experiment. The letter and digit appear randomly in different positions on the computer screen, sometimes at the same time and sometimes with 1/10 of a second offset between the two objects. Our examination of the role of attention focuses on the correlation between the first fixation (the first object that the participant looks at directly) and the choice that participants make about which simple categorization task to perform at that moment.

Looking to Choose
Strong evidence can be found in the patterns of participants’ eye movements for the process of looking to choose, where people allow the object that they have looked at first to guide their decision about which task to perform. In particular when the two objects appear with a slight temporal offset, participants are more likely to select the task associated with the first stimulus to appear and this effect is mediated by the eye gaze. When you look first at an object, you are more likely to perform the task associated with that object.

Choosing to Look
While stimulus-driven effects such as the sudden onset of an object can draw attention and influence choice, participants in our studies also show evidence of choosing to look for the object that allows for the task they have decided to perform, acting in a goal-directed fashion. For example, the participant may decide to do the letter task and then search for the letter in the display, which will be the first item fixated on about half of displays. This pattern of behavior can be seen in situations where the task selected only matches the first fixation about 50%the time.

Interestingly there appear to be large individual differences among participants in how they approach the experiment, with some participants showing a high tendency to decide on the task and then search for the appropriate object, others showing a high tendency to perform the task associated with the first object fixated, and others appearing to adopt a strategy that involves both of these situations. Ongoing research in our lab is exploring the factors that influence when subjects look first versus choose first.

This research was made possible by a Faculty Research Grant, whose Principal Investigator is Kate Arrington, Associate Professor of Psychology and Director of Undergraduate Studies, Department of Psychology, at Lehigh.