Kelly Austin is an Assistant Professor of Sociology at Lehigh. She is in Bududa, Uganda this summer with a group of students pursuing her research in community health. You can see her previous posts here.

Our trip is winding down to its final weeks. The students are well-settled in their internship and research projects; they are doing great work at PDI education center, the village savings and loans associations (VSLA) and in their research on mental health and global health volunteering. Over the last few weeks, I’ve completed my coffee interviews and another set of malaria interviews, which looks at community members’ perspectives on the malaria burden. I have had to do a lot of computer work lately, analyzing my data and writing up the findings. I have also had a “revise and resubmit” decision on another manuscript I’ve been trying to tackle. But all of that has been a bit difficult with the electricity being so faulty…

We’ve had several days without power. The prolonged lapses in electricity are most commonly due to “load sharing.” Uganda does not produce enough power to sustain all of the districts or regions at once. So they literally “turn off” entire districts for days at a time to share the load with other areas. I asked Dezz how long they usually turn off the power in Bududa for load sharing. He responded, “It can depend…on if someone in Kampala forgets about you or not.” Other “blackouts” might only last 1-2 days or several hours. These are mostly due to people tapping into the lines illegally, which is widely common here. Walking up and down the paths of the trading centers, you can see shops and dwellings securing to the electricity wire with a bent nail or piece of scrap metal. All of the recent power surges have cost us 3 surge protectors, as well as my computer charger, which is totally fried. Luckily, Mark & I use the same type of charger, but now we are sharing one charging block between us, which makes working on the computer even more of a challenge.

We all seem to have our “thing” that we need to make us feel comfortable here. Kevin, my colleague the film maker, is a totally technology guy, as you could guess. He gets very anxious when the power is out. For me, I miss cold water. What’s funny is that Ugandans actually fear the cold and cold beverages. They think being cold or taking cold food or drink makes you ill. When we’re able to go to a restaurant in town and you order a soda or water, the waiters always ask you, “Would you like your soda cold or warm?” It makes me smile every time. Can you imagine a waiter in the U.S. asking you if you’d like your soda served warm? We are socialized to expect all of our drinks to be cold.

Yesterday’s trip to town was quite a feat. The rainy season begins in July, and so it has! It rained steady for 3 days in a row. When it rains like that, everything comes to a standstill here. The roads are impassible. It’s even difficult to walk on the slippery, clay-like mud. It had stopped raining for several hours, and we had an appointment in town to take Papa and some of the students on a tour of the 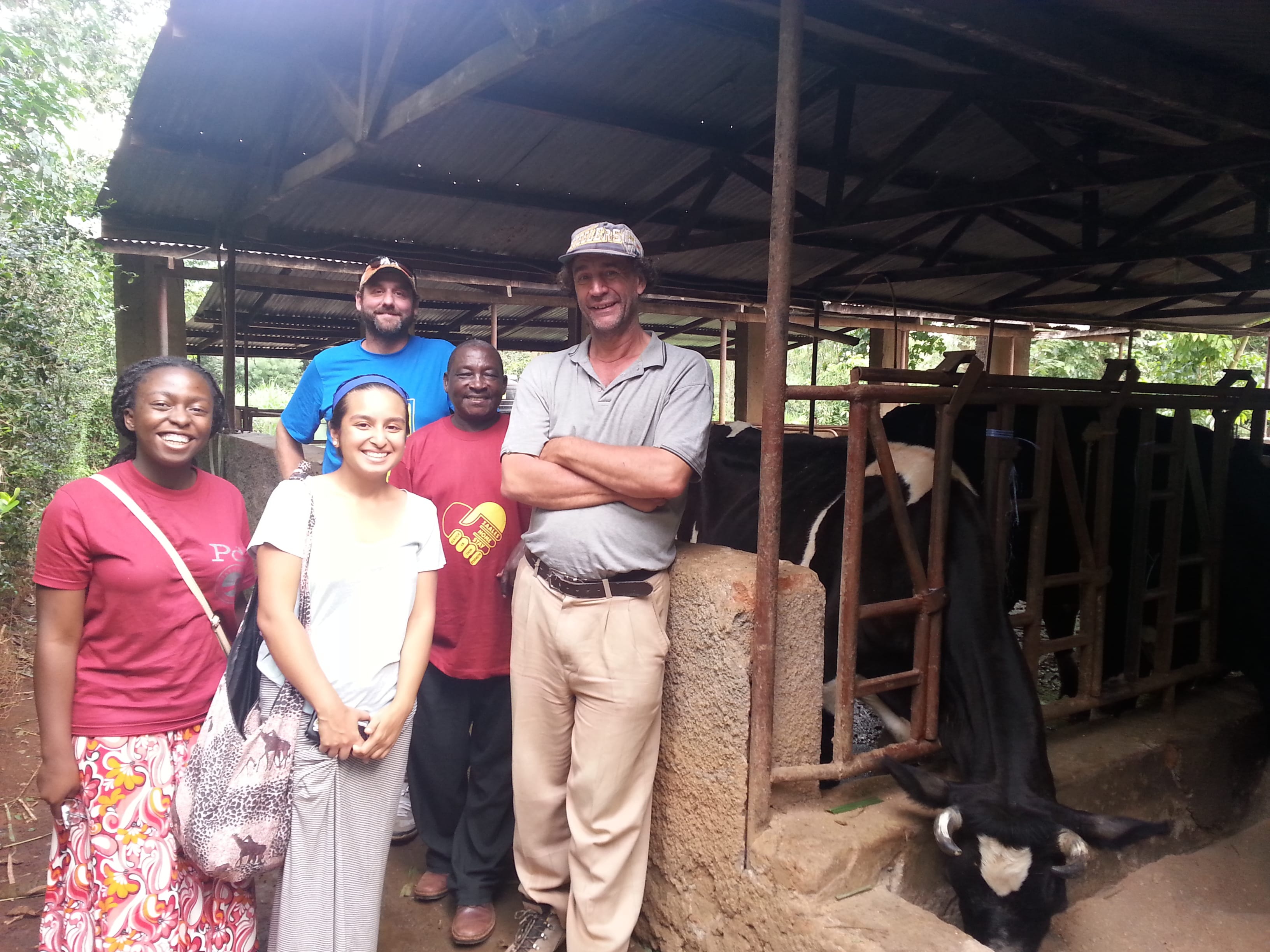 Dutchman’s farm. The “Dutchman” – yes, that’s what he’s called – relocated to Mbale (town) from the Netherlands in the 1990s and started a milk, yogurt, and cheese farm. As cheese is not a part of the Ugandan diet, he is the only one that makes cheese in the entire region, and he distributes it to all the “mzungu” hotels and restaurants in a 90 mile radius. On his tour, he shared with us the cheese-making process from beginning to end, all steps of which he completes on his 10-acre farm. His enterprise is truly a demonstration of sustainable development, as all “wastes” are recycled back into the farm. For example, he uses the cow manure to make his own biofuel. And the whey left over from cheese making is used to feed his pigs.

While the tour was amazing, getting there and back was more than an adventure. We had to pass through market first (Thursday is market day in Bududa) where there are hundreds of people, matatus (15-passenger taxi vans that they cram at least 25 people into), and bodas (motorcycle taxis) crowding the road and trying to sell you things. Then, the mud pit began. We almost got stuck several times, but managed to make our way through it, oftentimes, at a 45 degree angle, and nearly sliding into the ditch at several points. It takes about 90 minutes to drive the 20 miles to town. On the way, we pass a number of sights, including huge trucks packed with people, cows, goats, etc., dozens of people standing and hanging onto the rails, scrunched like sardines. We always see these men who transport bananas to town to sell at the larger market by bicycle. They take several large bunches all the way from Bududa to Mbale, pushing their load by foot on the way there, then riding their bikes on the way back. It takes them the entire day. One time, I asked Papa how much they make doing that. He said about 5,000 shillings ($1.70 USD). There’s a window into the extent of poverty here.