Nicholas Sawicki is an Associate Professor of Art History in the Department of Art, Architecture and Design at Lehigh University.  He has been working this summer on an exhibition in the Czech Republic.

For research, the summer months have a different pace to them than the rest of the year.  The campus becomes quieter, time frees up, and it becomes possible to work on larger projects that can’t be fit into the usual academic calendar.  This is the time of year when I’m either buried in writing or packing my bags for travel, and this summer has been no different.  I’ve been spending most of my days putting the final touches on a museum exhibition that I’m curating in the Czech Republic, which I have just finished installing.

The exhibition focuses on the artist Friedrich Feigl (1884-1965).  He was a prominent modernist painter and printmaker from Prague, and spent part of his career in Berlin and London.  I have been publishing on Feigl for some time, and a few years ago I was approached with the idea of curating an exhibition of his work.  The invitation came from the Gallery of Fine Arts in Cheb, a Czech state museum in what used to be known as the Sudetenland, the part of Czechoslovakia that Nazi Germany annexed in 1938.

Today Cheb is a city of around 30,000, with a historic town square of late gothic, renaissance, and baroque buildings.  The Gallery of Fine Arts is housed in a large palace built in the early 18th century as the city’s town hall.  It has an extensive museum collection, and has recently started organizing exhibitions of German and Jewish artists once active in Czechoslovakia, whose memory and legacy was mostly erased by World War II, the Holocaust, and postwar communism.  Feigl was Jewish and spent much of his life in the country, until the Nazis advanced on Prague in spring 1939, forcing him and his wife to flee for the west.  They lost much of their family to the Holocaust, and escaped for London, where Feigl joined a large community of exiled Central European artists, writers, and cultural figures.

The planning of a museum exhibition is generally a long process, with countless decisions to be made along the way: selecting which works to include and researching their history, arranging loans and transport of works from different museums, creating a plan for how these objects will be installed in the gallery space, and writing the narrative text and captions that audiences will use to navigate the exhibition.  The two years I had to work on the project were a short window of time, all the more because I was concurrently editing a new monograph on the artist, to be published with the exhibition.  To take me through the final stretches of my work, I had the support of a Faculty Research Grant, which helped me bring the project to conclusion.

I had started planning for the exhibition early on with some quick sketches, initially thinking about what selection of works would best tell the story of Feigl’s life and art, and how this narrative might unfold in the five rooms that make up the gallery space.  I also decided on a title for the show, Friedrich Feigl: The Eye Sees the World.  It had to work equally well in Czech and German, as these two languages are also in use in the textual materials accompanying the exhibition. The titling takes its cue from what I have come to understand as a discerning feature of Feigl’s art—the way his innovative modernist works always retain a connection to the visible world, an unwavering interest and curiosity for the observable subjects of his own physical and social surroundings. 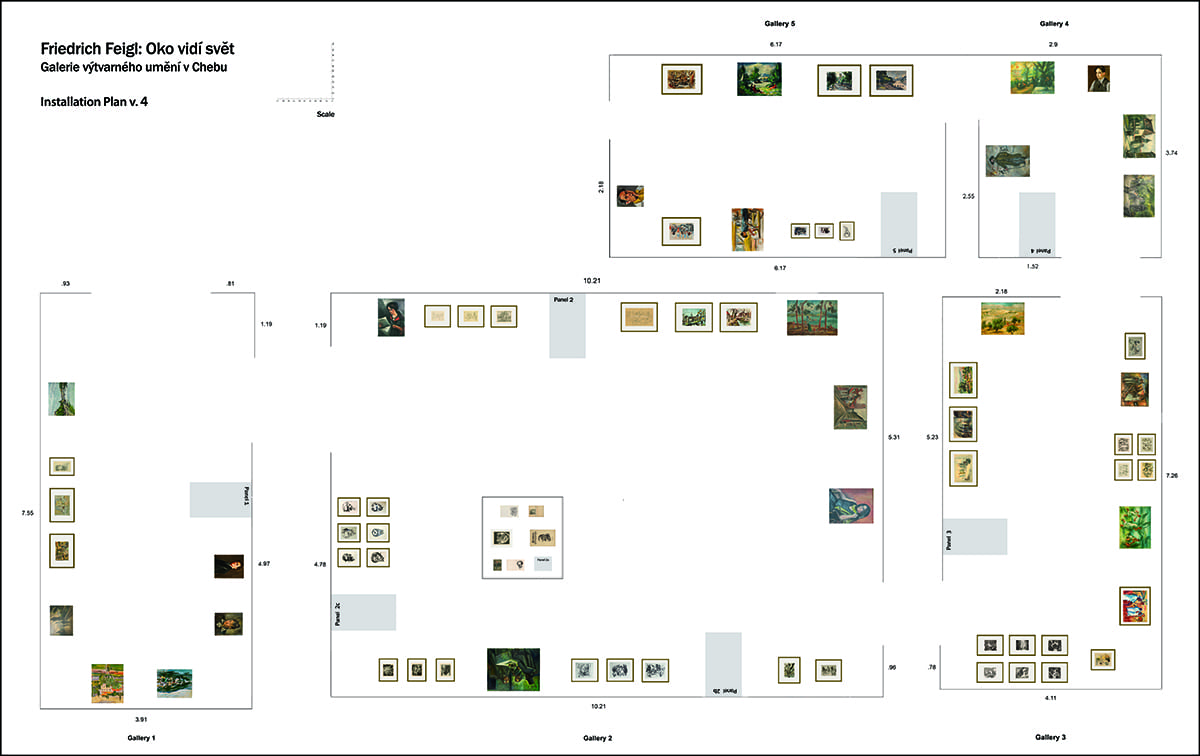 As the planning process for the exhibition moved forward, I worked closely with the director of the Gallery of Fine Arts, Marcel Fišer, to determine which of the works we could actually borrow from museum and private lenders, scattered across the Czech Republic, England, Germany, and the United States.  I then used design software to produce more detailed iterations of the installation plan.  The exhibition features more than 70 works, and for a show this large in scale, designing the installation is like putting together a puzzle without fully knowing what the outcome will look like until the very end.  There are multiple moving parts, and it’s a process that benefits from feedback.  While working on the show, I dropped in to talk with colleagues Mark Wonsidler and Jeffrey Ludwig at the Lehigh University Art Galleries to get their input on the exhibition design, which I then further refined and sent on to Cheb.

When I arrived to Cheb about a week before the opening of the exhibition to oversee installation, the works had been uncrated and placed on foam pads at the base of the gallery walls.  For curators, this is the moment at which things really come to life.  You finally see the arrangement of all the works in person, and what existed as an idea on the 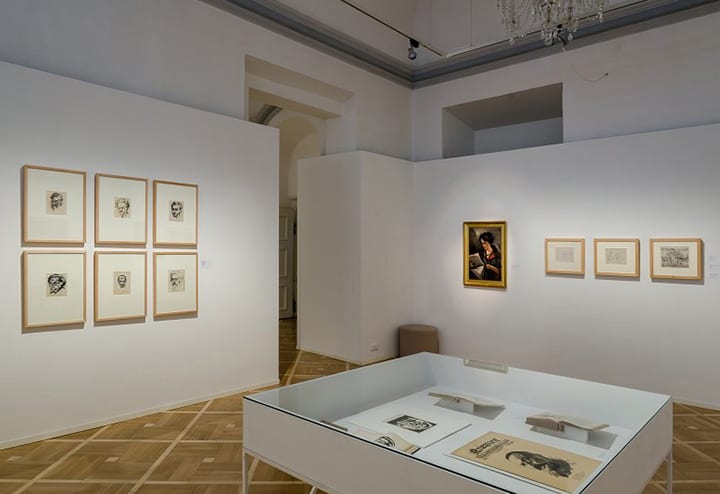 drawing board is now visible at full scale and in three dimensions.  You start to better understand what does and doesn’t work in the exhibition design, and at this point there are usually changes to be made.  We made adjustments to the placement and framing of several works, and then the staff of the Gallery of Fine Arts started on the hanging.  Text panels, labels, and wall graphics were installed, and at the entrance to the exhibition we included a five meter wide enlarged archival photograph of Feigl in his youth.

Feigl was among other things an accomplished illustrator, and the exhibition contains a display case showing some of the many books and magazines that he illustrated.  These include a rare copy of the World War I artists’ magazine Kriegszeit (Wartime), produced by the Berlin publisher and gallerist by Paul Cassirer; and the literary anthology Deutsche 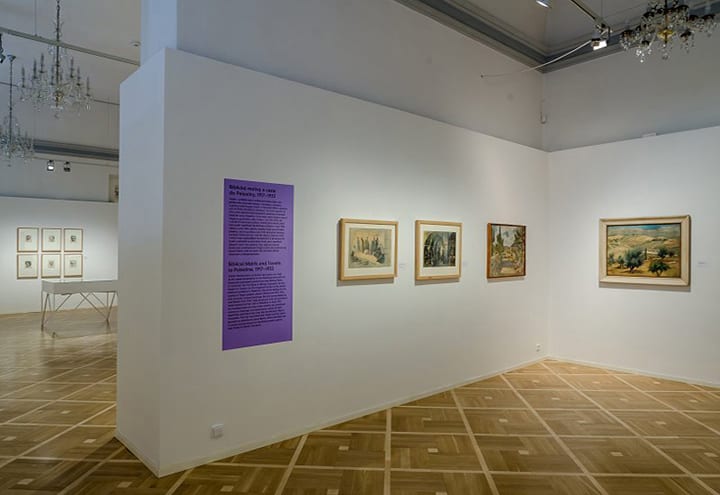 Dichter aus Prag (German Poets from Prague), which Feigl illustrated with portraits of writers with whom he was friendly.  Feigl had extensive ties in the literary world, and was particularly close to Franz Kafka, Max Brod, Franz Werfel, and the mostly Jewish Prague authors of their circle.  He also spent nearly twenty years living in Berlin, and his wife Margarete Handel was raised in Germany.  Two painted portraits of Handel hang in the exhibition, and she was a frequent subject for Feigl.  The final section of the exhibition highlights works that Feigl produced in emigration in London.  I had a chance to travel to England last year for research, and it is remarkable to see his London pictures make the trip back to his home country—the reverse path of his forced emigration in 1939.

After the opening of the exhibition, it is time for me to make my own way back to the United States.  I find it difficult to pull myself away from the gallery space.  Exhibitions are by nature ephemeral, and the thought crosses my mind that I probably won’t see most of these works again, at least not this close or together in one place.  On the train trip out of Cheb, I am also reminded of how we experience works of art differently in person than when we see them in reproduction or digitally rendered.  Colors come to life, and visual and historical connections become evident that weren’t there before.  In the best of cases, the encounter somehow changes you, often in ways that you only later come to fully understand.