A persistent debate surrounds the chronology of the colonization of Europe. The Guadix-Baza Basin in southern Spain is the repository of 2,000 m of ancient sedimentary strata that record the depositional, climatic, ecological, and tectonic events along the European-African plate boundary at a time of hominin migration out of Africa. The basin was also the 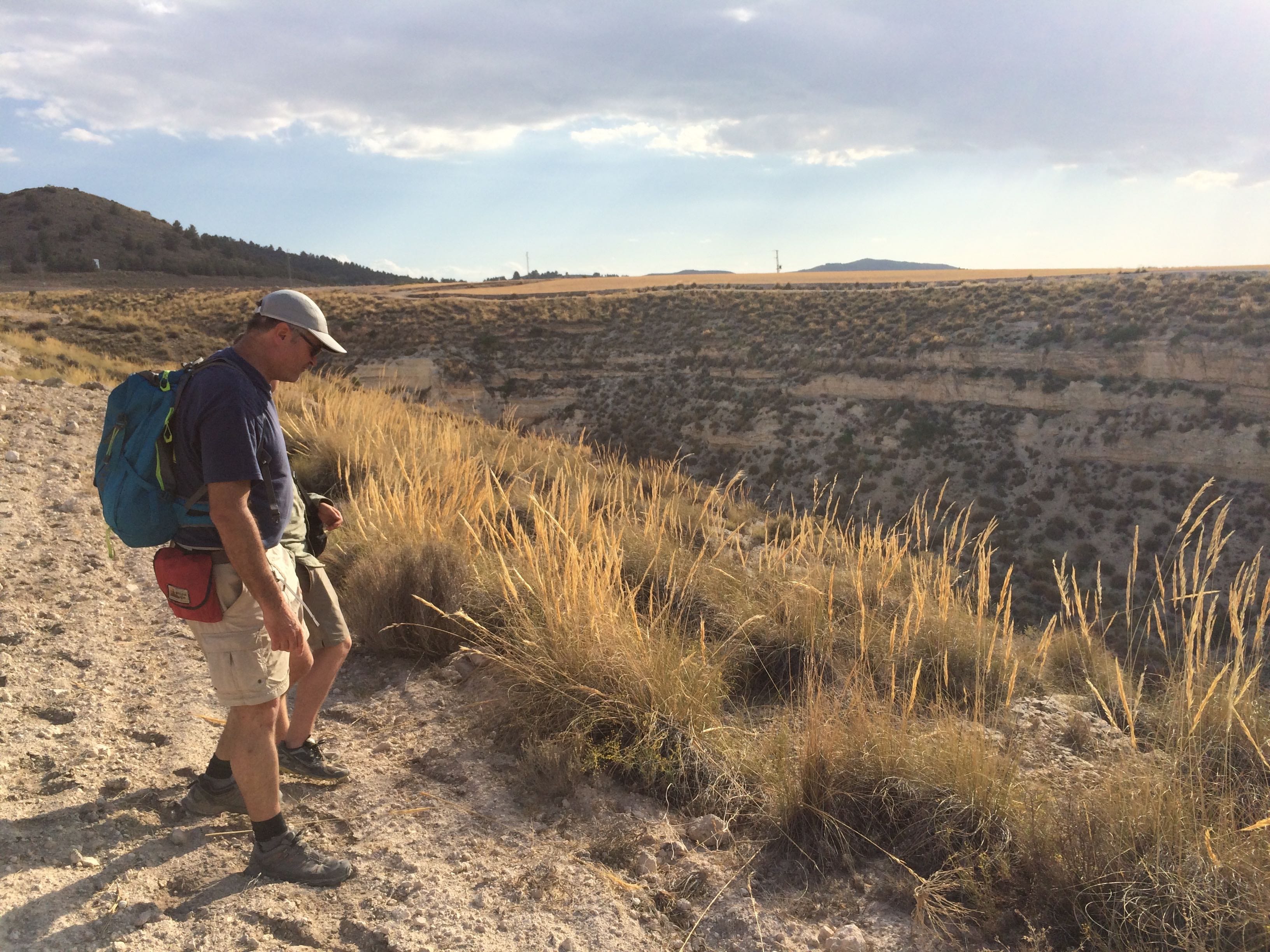 lake beds where a 1.4Ma hominid tooth (pictured) was discovered site of the last connection between the Atlantic Ocean and Mediterranean Sea before the modern connection at Gibraltar. Retreat of the seaway resulted in the largest lake in Europe, which evolved from grassland environments to a savannah landscape with abundant game. Previous studies have established the paleoenviromental evolution of the archeological sites but without precise chronologies it is not possible to reconcile arguments as to whether evolving climactic or geographic barriers in the Betic Cordillera were instrumental in facilitating the peopling of Europe or whether hominins simply “followed the herd”.

Josep Parés (Spanish Research Center for Human Evolution) and I are using the record of periodic changes in Earth’s orbital parameters (Milankovitch cycles) that are encoded in nearly all sedimentary rocks to refine chronologies. Orbital cycles are known to result in natural long-term variations in Earth’s climate. When tuned to absolute time control, cyclostratigraphy constitutes a metronome with a precision, accuracy, and continuity that out performs other dating methods. Our sampling strategy will allow the basin’s paleoarcheology sites to be more precisely dated and correlated so that coordinated paleogeographic and paleoenvironmental parameters can be established. The Earth’s surface is a dynamic interface that evolves through the influence of tectonic and climatic drivers. Understanding the feedbacks between solid-Earth deformation, surface processes and landscape evolution requires a process-based approach that integrates detailed field observations and temporal determinations across many spatial scales. Changes in tectonic forcing or processes of surface erosion and deposition can alter the near-surface stress field and influence fault evolution, uplift, subsidence patterns, and

topographic relief. East of Granada, Spain, Earth and Environmental Sciences Professor Claudio Berti,  EES graduate student James Carrigan and I are testing the various models available for the evolution of the Gibraltar Arc and Alboran Sea against the predictions each makes for the Betic Cordillera with field observations and chronologic data along the main drainages of the mountain belt and marine terraces exposed along the Mediterranean coast.

The mountains resulted from the collision between the African and Eurasian tectonic plates over the last 10 million years. The dating methods allow us to measure rates of surface change to add temporal evolution to our snapshot of the current state of the landscape and allow us to reconstruct the tectonic processes that have led to the present state and to test the sensitivity of topography to record processes within the solid Earth. In the scorching summer heat there are very many reasons to find your way to southern Spain. Most of the people I know would say that the crystal clear water of the ocean, many millennia of alternating cultures, and the exquisite food would be at the top of the list…but I am a geologist…and I’ve come to this gorgeous part of the world to study how mountain start, evolve, and grow. From a small wrinkle at the bottom of the ocean, to the majestic peaks of Sierra Nevada, standing more than three kilometers tall above the Mediterranean coast.

How and why do I do this? Well… this is the story I will post to you over the next several days. It is now time for me to enjoy the fresh seafood after a long day in the field! My colleague, Claudio Berti and my student James Carrigan are waiting for me. Talk to you soon!