This upcoming week begins final preparations not only for the next round of four o’clocks, but also for Halloween, one of Lehigh’s most deeply rooted traditions.

In the past, Halloween was one of the most celebrated holidays on Lehigh’s campus, second only to Le-Laff Weekend and House Party (or Houseparty). Fall House Party took place around Halloween, so that the Fraternity Houses were decorated accordingly*. Nowadays we celebrate around campus with decorations and pumpkins, but back in the day it was a full blown campus wide event- there were parades, dinners, and dances, and students went all out to win decorating competitions between residence halls: “The men of Taylor plan to transform the section E lounge into an orbiting space station, where they can spend the “Evening on the Moon”. The void of space will be filled with stellar sounds taped and recorded prior to blasting off.” -Brown and White, October 30th, 1959

Greek parties were brought down to campus as students dressed in masks and costumes flooded down from the hill spookily, in many cases even bringing the festivities to South Bethlehem residents. The administration was in on the festivities too, bringing in Halloween themed speakers and sponsoring Halloween performances in Packard. Halloween was the number one party theme for fraternities. Check the digital archives of the Brown and White for the historical coverage of these amusing events.

Halloween is still one of the most emphatically celebrated holidays on campus, and with a history like that it’s no wonder why. 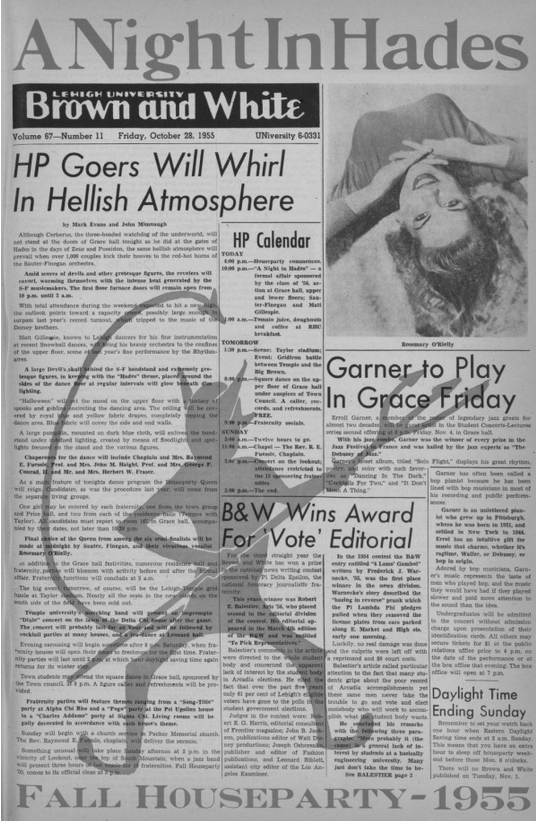