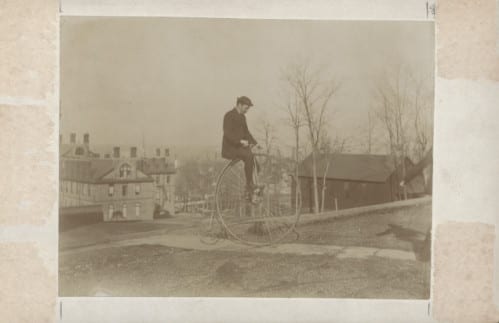 Around 1890, this stylish Lehigh student was seen on his Velocipede riding around the Campus –Chemical Laboratory (now Chandler-Ullmann Hall) and (possibly) Hydraulics Lab (gone by the early 1900s) are on the background.

That is a bicycle, not a unicycle–look closely and you will see a small second wheel in the back. This type of bike is called a “high wheeler” for fairly obvious reasons. It came about around 1870 and bicycle makers just kept making the front wheels bigger and bigger as they realized that with a larger circumference, the wheel would travel farther with one pedal revolution.

The first American cycling company didn’t come about until 1878, with Columbia Bicycle. The company was based at a sewing machine factory, and each high-sheeled bike cost $125 while a sewing machine cost $13.

This man was likely the focus of much of his classmates’ jealousy with his expensive bicycle, though we’re not sure how he got around efficiently with all of the stairs. He must have broken a sweat riding up the hill, too, but Chandller-Ullman isn’t so high up.

With Lehigh’s Master Plan involving letting even less cars on campus, bicycles may soon be the only option left for students who are always rushing between the buildings. Who knows, though–with Lehigh’s “pedestrian campus,” they might not want cyclists, either.